The media chattering classes are so insulated from reality, thanks to Stasi-like censorship, that they frequently descend into unwitting self-parody.  Real-life Titania McGraths. Look at this from a Guardian journalist - an oxymoron if there ever was one. Especially when said journalist is an affirmative action female from Nigeria. Logic, consistency and self-awareness are not to be expected from such people. But the following still takes some beating.

Apparently women's magazines have succumbed in reassuring numbers to the 'get woke, go broke' fate. Readership has plummeted and many household names have disappeared down the tube. "Cosmopolitan saw its print circulation drop by a third in the last half of 2018; weeklies Woman and Woman’s Own were down 20% and 19% respectively. Now magazine dropped 43%." Now get this: "The closure of Teen Vogue’s print publication was met with widespread outrage, after we had watched the magazine mature into a politically engaged tome for pubescent readers who cared about fashion, but also wanted to ensure that the climate crisis hadn’t scorched the world in which it could exist." Oh ma' achin' sides!  "Although glossy magazines are the worst affected, online women’s publications have not escaped – the Debrief and the Pool suffered the same fate. The closure of Lena Dunham’s email-based Lenny Letter showed that even a famous CEO and acclaimed writers couldn’t ensure a publication’s longevity."

And this: "The sad thing is that the current purge" - yes, she actually wrote that word - "is happening at a time when women’s magazines are less sexist and more progressive than they ever have been.  Last year’s September issues made history with virtually every one featuring a black cover star." After which it went bust. For the life of me I can't imagine why. 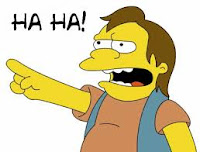 To such people hearing views not conforming to their own would be like the family dog giving his opinion on Brexit. Then again maybe some day they'll get their pin-heads around this whole 2+2=4 thingy. But in the meantime we should rejoice and capitalise on their unfathomable ignorance and blindness. They represent a target-rich environment.
at 15:26
Share