The Office for Standards in Education, Children's Services and Skills (Ofsted) is arguably the single most destructive, malevolent, nation-wrecking Government agency in Britain. Ostensibly aimed at improving standards of education, it was quickly weaponised against the native population, becoming the enforcer of an anti-White, anti-male and anti-Christian ideology while promoting multiculturalism, Islam, diversity, early sexualisation of children and White guilt. Its Common-Purpose inspired 'inspectors' aren’t objective fact-diggers but rather robotic ideologues mercilessly mangling facts to fit their narrative while  discarding any that subvert it. Preparing British students with the skills, knowledge and reasoning ability to prosper in today's world must surely rank close to the bottom of Ofsted's priorities. 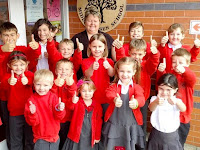 Regular reader Cognitive Dissonance sent me this link of an Ofsted Report which said pupils at Middle Rasen Primary School in Lincolnshire lacked 'first-hand experience' of modern British society. It said pupils should interact with 'counterparts from different backgrounds' and warned ominously that 'very few' at the 104-pupil school are from ethnic groups. Which would surprise nobody other than an Ofsted inspector given that Middle Rasen is 97% White. For now anyway.
This is par for the course for Ofsted. For example a Christian school in Reading was warned it could face closure for failing to invite imams and other religious leaders to take assemblies. There have of course been no reports of Muslim schools been criticised for not inviting Christian priests to address their assemblies.

Ofsted being a textbook example of Alinskey / Frankfurt School nation-wrecking that I wondered whether The Tribe were particularly active there. Why did I wonder? The Chairman is one Julius Weinberg while the Chief Executive is Amanda Spielman who has said in an interview with the Jewish Chronicle: “Passover and New Year have been part of my life ever I since I married” her Jewish husband 22 years ago.